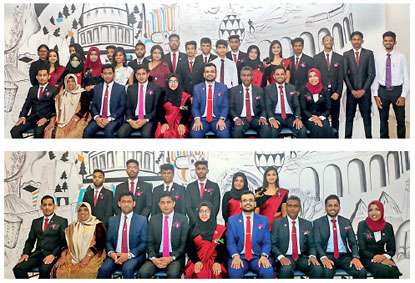 APIIT-Sri Lanka was established in 1999 in partnership with Staffordshire University in the UK. Over the past 22 years, APIIT has trained over 4,300 graduates in Business Management, Computing/ IT, and Law. APIIT’s contribution to higher education goes beyond the training of highly resourceful and enterprising graduates; notably, it has been able to shape the development of private higher education in Sri Lanka and set a benchmark for its quality and standards. In 2018, APIIT Sri Lanka extended its operation to Kandy to provide students residing in central Sri Lanka with direct access to its high-quality higher education service.

The Office Bearers were introduced to the audience and were pinned by the relevant dignitaries. TM Fathima Rifka administered the Oath and wholeheartedly congratulated the charter office council followed by the acceptance speech by TM Akeela Shadique, the Charter President of APIIT Kandy Toastmasters Club. TM Akeela Shadhique was installed as the president of the club with the executive committee for the year 2022/ 2023 comprising of Vice President of Education – TM Ashif Amjad, Vice President of Membership – TM Mahdi Hilmi, Vice President of Public Relations – TM Sathya Fernando, Secretary – TM Shadhan Niyas, Treasurer – TM Asra Abdul Salam, Sergeant at arms – TM Fahri Fazloom. Dr. Chathura Warnasuriya, Head of APIIT Law School emphasized the purpose of Toastmasters and encouraged the students to utilize their skills in inspiring and enhancing the lives of those who are in need.

Meanwhile, the speech of DTM Nisal Weerakoon, the distinguished District Director, and keynote speaker of the day, highlighted the importance of grabbing opportunities to make a difference. The ceremony consisted of several segments of entertainment that added color to the event making it a glamorous evening. The event concluded with a vote of thanks proposed by TM Ashif Amjad, The newly chartered Vice President of Education of APIIT Kandy Toastmasters Club.