Silver medalist Nelushi Vithanachchi has received a scholarship from the MIT, one of the top universities in the USA Students who won the silver and bronze medals at the 54th International Chemistry Olympiad (IChO) 2022 representing Sri Lanka were recognised at an award ceremony held on 29th December 2022 at the IChemC headquarters, Adamantane House in Rajagiriya. The Chairman of the National Science Foundation of Sri Lanka, Professor Ranjith Senaratne graced this occasion as the Chief Guest and the National Coordinator of the Biology Olympiad, Senior Professor Hiran Amarasekara participated as the Guest of Honour.

The event was organised by the Chemistry Olympiad Sri Lanka (COSL) committee of the Institute of Chemistry Ceylon (IChemC). The silver medal winner Nelushi Vithanachchi of Visakha Vidyalaya, Colombo and the three bronze medalists; Benuljith Mindula Karunarathne of Royal College, Colombo, Vasanthamohan Sasangan of St. Michael’s College, Batticaloa and Ranasinghege Kavinda Chathuranga of Nalanda College, Colombo 10 awarded with the medals, certificates and gifts received from China, the host country of this year’s competition. Furthermore, the finalists of the National Chemistry Olympiad competition held in May 2022 also received certificates. 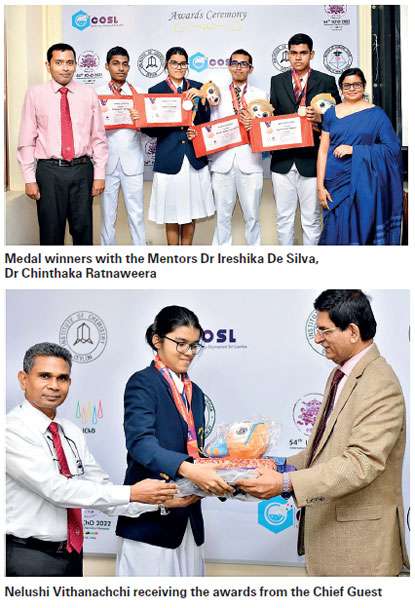 Nelushi Vithanachchi, who won the silver medal in the IChO, is noteworthy for having been accepted to the Massachusetts Institute of Technology (MIT) in the USA, the top-ranked university in the world, to pursue higher education. The President of the IChemC, Mr N. M. S. Hettigedara welcomed the gathering and congratulated the winners for bringing honour to the country. The Chairperson of the COSL committee, Dr. Ireshika De Silva presented a brief introduction to the Chemistry Olympiad Sri Lanka committee and to the National and International Olympiad competitions.

She said she is very happy and proud of the achievements of the team and thanked the mentors for voluntarily conducting online training workshops for students. The Chief Guest, Professor Senaratne, expressed his satisfaction with the victors and his sincere congratulations. He also wished them luck in achieving the greatest positions possible in the field of science. He further exhorted the youngsters to engage in endeavours that would propel them forward. The Guest of Honour, Prof. Amarasekara, also sent wishes to the students. He also urged the kids to challenge conventional thinking and follow their aspirations using the best resources the world has to offer.

After the presentation of awards, the four medal winners addressed the audience and expressed their experiences in representing Sri Lanka in the IChO 2022. They all thanked the mentors who trained them with immense dedication. Also, they mentioned that though there is a big gap between the A/L chemistry syllabus and the International Chemistry Olympiad content due to the training they received they were able to make this achievement. They invited youngsters to take part in future Chemistry Olympiads as they can develop their logical and critical thinking skills which will help their future academic careers.

The two mentors of the team, Drs Chinthaka Ratnaweera and Ireshika De Silva, invigilators of the remote examination and committee members were also recognised at this event. Dr Upul Kumarasinghe, Secretary of the committee delivered the vote of thanks to end this ceremony. This is the 3rd time in history a Sri Lankan team participated in the IChO. The Sri Lankan team won three bronze medals and an honourable mention in the IChO 2020 and 2021 too. The COSL committee is eagerly waiting to select a team for the 55th International Chemistry Olympiad which will be held in Switzerland in 2023 and expect even better performance from the team.

Those who are interested in participating in the National Chemistry Olympiad competition can visit the COSL website through the www.ichemc.edu.lk/cosl for more details.