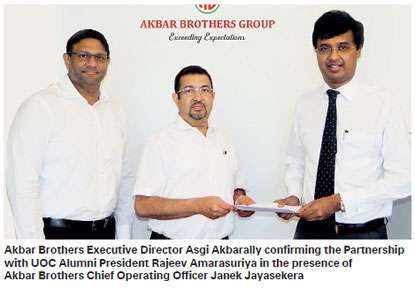 Members of the Association comprise all alumni who have passed out of the University of Colombo. Today, the association continues its role of fostering close ties between the student body, the university staff and academics, and its alumni. The Alumni Association of the University of Colombo views its role as “connectors” and thought leaders very seriously and to this end, not only conducts various programmes and initiatives targeting the development and welfare of undergraduates and its members but also conducts public forums to create awareness and discussion in matters of public importance.

Asgi Akbarally, Executive Director of Akbar Brothers Group speaking at the signing ceremony said “Akbar Brothers Group of companies continuously aligns with the reality of social and environmental sustainability across all our sectors within our national economy and globally. Our priority on the triple bottom line growth fosters sustainable economic opportunities, and partnering with the University of Colombo Alumni has only strengthened our motive of being a responsible corporate citizen in the development of our nation.” UoC Alumni President Rajeev Amarasuriya said he was appreciative that Akbar Brothers, a leading conglomerate in the country extending the partnership in spite of the many difficult times.

The last two years were difficult years with the universities operating mostly virtually and with the students now returning to campuses there is much that needs to be done to support them in returning to conventional university learning. He went on to state that unlike most other universities around the world which are fee-levying, State Universities in Sri Lanka provide undergraduate studies completely free of charge and it is the responsibility of the alumni and all stakeholders to support the university system which is a primary source of talent creation for the country.